If  you have a question or query about the games on the site, have a read through the FAQ below. If the answer you seek isn’t there, please contact me.

Heardle is a music intro guessing game, based on the very popular Wordle game that took the world by storm during lockdown. The premise is simple – a clip of a song will play and you have to guess the song/artist in as few goes as possible. Think of it as an online game of ‘Name That Tune’. You can play the original Heardle game here.

What is Heardle Decades?

Heardle Decades (and the artist specific versions on this here website) are clones of the original Heardle game and based on the first version of the game. All the games on this site have been created and are maintained by one person – ME! So please be kind if something doesn’t work as expected!

How Do I play Heardle?

Playing the game is incredibly easy:

NOTE: If you share your score on social media, please avoid posting spoilers as this can ruin the fun for other players who may not have tried today’s game.

What are the different variations of Heardle?

There are loads of different Heardle variations including the original, my decade games, different genre based games, as well as a mountain of artist specific games(have a search through google). On the website you’ll only find games created by myself (unless otherwise stated).

I typed in the correct artist and/or song but the game said it was wrong, why?

If you just typed in the song title, hit submit and got a wrong answer then you’re not playing the game correctly. You must select the song from the list as the game is looking for that specific song title – artist. Eg:

If today’s song was ‘Drive’ by The Cars and you typed in ‘Drive’ , ‘The Cars Drive’ or ‘Drive by The Cars’ then you would get it wrong as the game is specifically looking for ‘Drive – The Cars’ . Selecting the song from the list as you type your answer is the correct way to play the game.

The game will only display 10 songs on the pop-up list; I have done my best to limit each decade to 10 songs by a single artist to compensate for this. Often when typing a song, it will appear at the top of the list which is often hidden off-screen on mobile phones. Simply scroll up to (hopefully) see it. Sometimes you need to type in more of the song’s title / artist to reduce the number of possible answers that pop-up.

I missed a day, can I go back and play it?

Soundcloud won’t play the song for me, why?

If you see something like this when attempting to play any of the Heardle games, then unfortunately, that day’s song isn’t available in your country due to geo-blocking.

Geo-blocking or geoblocking is technology that restricts access to Internet content based upon the user’s geographical location. The term is most commonly associated with its use to restrict access to multimedia content on the Internet, such as music, films and television shows, primarily for copyright and licensing reasons.*

Heardle (and its clones) can only link to one song at a time and so there will be occasions where some songs are not available to players in different countries. Unfortunately, it isn’t possible for me to spend the time/effort ensuring that all songs are available to everyone. Remember, it is just me! And this isn’t my day job; I created the Heardle clones on this site and the website as a bit of fun!

How can I get around geo-blocking?

It may be possible to get around geo-blocking with a VPN (Virtual Private Network). These are often used to disguise a person’s location when browsing the internet.

I can’t hear the song intro, but my friend/partner/lover can

Do you have the volume turned up on your device? Are you listening in stereo or mono? This may seem silly, but recently David Bowie’s Space Oddity was featured on Heardle 60s and some people reported that they couldn’t hear anything.. It turns out that the original recording starts off at low volume and only in the left channel. This meant that if you were using a device with poor sound output or were only listening through the right channel, you wouldn’t hear anything until the song mixed into stereo later on. It’s rare, but it can happen. I do audition all the songs before they go into the games and mistakes do happen.

I don’t know any of the songs, where did you dig them up from?

All the songs on the decade games are compiled from UK and US chart data (along with some personal favourites thrown in for good measure). However, both the 60s and 70s decade games contain additional songs that have been considered the best of their given decade. All the songs are shuffled from huge playlists and so there may be days where a song that was only popular in the UK is played and vice versa. Don’t be disappointed that X song didn’t chart in your country and that you didn’t know it. Be happy that you’ve discovered a new song (one you may just love).

It’s worth mentioning that I do monitor player success/fails regularly and may make changes to future playlists based on current player data. For example, recently I added some specific genre-based songs to Heardle 70s, but all but a handful of players knew the songs and so I removed them from the game. The games should be both fun and challenging but not impossible!

Why is there a song from a different decade to the game decade?

My friend has a different song to me, why is that?

This is almost certainly down to you both playing different versions of the game. Occasionally, I will update the games with new songs/remove unpopular ones or make last-minute changes due to real-world events (such as the untimely death of Andrew ‘Fletch’ Fletcher of Depeche Mode). This can throw the game playlists out of sync if the game isn’t updated or only one person updates.

How do I check what version I have?

In the game, if you click on the (i) icon at the top of the screen, you’ll see the ‘ABOUT’ pop-up. Your current game version will be displayed at the bottom. 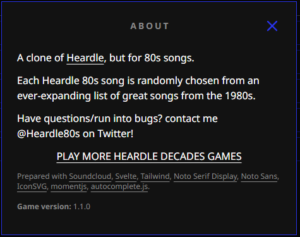 How do I update my game version?

I love the games, how can I support the developer?

I’m truly overwhelmed and blown-away by the support and love shown for the games on social media. It really is wonderful that people from all around the world are enjoying the games on a daily basis. If you want to do something a bit more than just a ‘thank you’ on Twitter (which is super awesome and always appreciated) then you can always ‘buy me a coffee’ on Ko-Fi.

While the games are free-to-play and will remain ad-free, they do cost me money to keep running (server and domain costs). So any support you give via a ko-fi donation would help immensely. I didn’t create the clones for the $$$$, and I don’t expect/demand people start throwing wads of cash at me hahaha. Unless of course you’re a multi-millionaire and you want to ‘pay it forward’. I promise I won’t fritter it away on Pringles and Pepsi Max*

*Can’t guarantee this at all.

I have an idea for a Heardle game, will you make it?

While that’s certainly not out of the question, it does come down to a number of factors including time, popularity and song availability. If all three of these factors are met then there’s a good chance I can do it. They do take a lot of my time to create and even more time to maintain. It isn’t my day job; they were created just for fun and they seem to have been a bit popular. In terms of popularity, a question to ask is ‘how many people are likely to play?’ If it’s just because you like an obscure band from the 1970s, then it’s unlikely many people will play it other than yourself. If however, if it’s a band like OMD, or a genre such as country, then there’s a good chance more people will want to play. Finally song availability; there needs to be a good selection of songs available on Soundcloud. I looked at doing a Duran Duran Heardle, but there weren’t that many songs available on Soundcloud to invest the time/effort in creating one.

I use cookies on the website and in the games to give you the best experience by remembering your preferences and repeat visits. By clicking “Accept All”, you consent to the use of ALL the cookies. However, you may visit "Cookie Settings" to provide a controlled consent.
Cookie SettingsAccept All
Manage consent

This website uses cookies to improve your experience while you navigate through the website. Out of these, the cookies that are categorized as necessary are stored on your browser as they are essential for the working of basic functionalities of the website. We also use third-party cookies that help us analyze and understand how you use this website. These cookies will be stored in your browser only with your consent. You also have the option to opt-out of these cookies. But opting out of some of these cookies may affect your browsing experience.
Necessary Always Enabled
Necessary cookies are absolutely essential for the website to function properly. These cookies ensure basic functionalities and security features of the website, anonymously.
Functional
Functional cookies help to perform certain functionalities like sharing the content of the website on social media platforms, collect feedbacks, and other third-party features.
Performance
Performance cookies are used to understand and analyze the key performance indexes of the website which helps in delivering a better user experience for the visitors.
Analytics
Analytical cookies are used to understand how visitors interact with the website. These cookies help provide information on metrics the number of visitors, bounce rate, traffic source, etc.
Advertisement
Advertisement cookies are used to provide visitors with relevant ads and marketing campaigns. These cookies track visitors across websites and collect information to provide customized ads.
Others
Other uncategorized cookies are those that are being analyzed and have not been classified into a category as yet.
SAVE & ACCEPT